By reading this post you can learn about VPN and its workings. VPN is just a term we use to describe a system which makes communication between two computers, regardless of how far they are, within a secure channel. Here the secure channel means you can convert the public network secure. As you know that a public network is nothing but the Internet, where can have access to any serve to get the required information.

So, A VPN is such a technology where you need to have two computers, both of which can be located in separate towns or countries, and an encryption technique to start a secure communication between the channels. The function of the encryption mechanism is to make the data or message encrypted so as no can in the Internet can decipher your message. If no one understands what you are talking to your friend residing in a different country, then you can say that your network is virtually private- this is why we call it VPN (virtual private network). 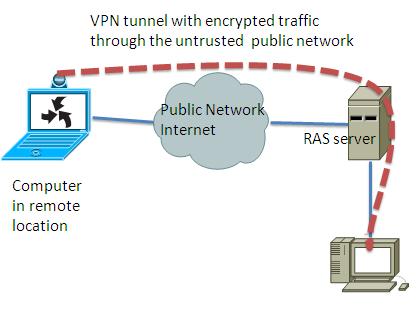 Basic working principal of VPN: say your computer is located in somewhere in Paris, France and you want to start a VPN connection with your friend who is in California, USA. At first you have to set up the VPN settings in your computer by allowing communication to take place only between you and your friend. In the later part of this post you will see how you can set up a VPN in Windows and what you need to do that.

Ways to create a VPN

In general there are two ways to start building your own VPN. One is to contact your IPS and ask them to provide a VPN service from your computer to the location where you desired network resides. The second way is to build it on your own. If you prefer the first approach, you do not have to worry about anything technical parts. But if you want to build it from scratch then you need to follow the following instructions:

You must have a user name and a password to access the remote access server. The RAS administrator will provide you the user name     and password. You just have to use those in order to gain access to the remote server. Once the RAS verifies your identity, you will get access to use the remote network.

After creating you VPN can fine tune its settings by opening the connection icon in your desktop. Just open the connection icon and then click on the “Networking”. Next, you will find the option to select either PPTP or L2TP as your tunneling method. 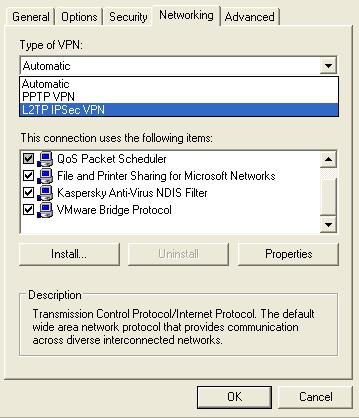 So, the main purpose of using a VPN connection is to get access to a remote network via the public networks such as Internet or telephone lines.

How to choose VPN protocol

Usually there are two popular VPN methods (PPTP and L2TP) that people use to connect to a VPN. Before selecting the preferred method you need to know the benefits of each. PPTP or point to point tunnel protocol is basically an enhanced version of PPP (point-to-point) protocol. Remember that PPTP and L2TP are just tunneling modes which become secure using a data encryption mechanism. L2TP is more secure than PPTP because it uses IPsec as its encryption mechanism.  If you only select one of the two modes as your VPN solution then it does not select an encryption by default, unless you use IPSec as your encryption mechanism. So, the main important part to ensure data security is to select an encryption mechanism. If your VPN need to support any Internet protocol, then you have to go for L2TP because PPTP only supports IP, not all protocols. You also need to remember that IPSec itself operates in two modes-each has its own advantages and disadvantages. The two modes of IPSec are transport mode and tunnel mode. If you select the transport mode, then only the data will be encrypted, not the header of the IP. On the other hand tunnel mode of VPN encrypt the entire IP packet along with the data and then add to it a new header for transmission. That is why tunnel more is more secure than the transport mode.

Build a VPN with Windows XP

By using the following method you can create your own VPN with windows Vista, 7 and 8.