Though many network engineers love using ADSM packet capture option, CLI(command line interface) mode is more useful and saves time if you want to customize your traffic capture command. Create a few customized capture commands in a text file and then paste it in the CLI of your ASA . use the following three generic  steps:

In the global configuration mode, type the following to start capturing traffic:

To capture traffic from a specific host such as 192.168.0.112 use the following command

To capture real time traffic sent from a specific host:

Note:  capout is a name used to label the traffic. 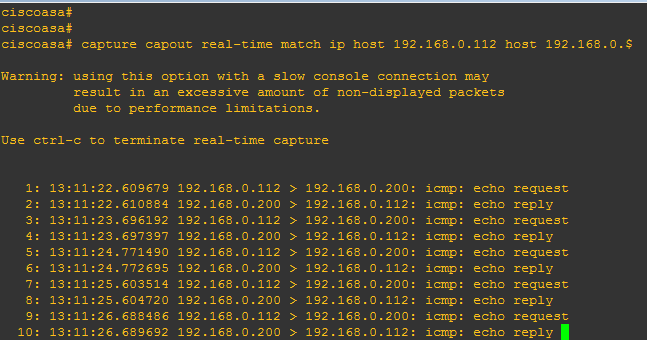 To see the captured traffic, use the command given below

How to stop the capture

Here is an example of how to stop capture.

How to capture Ethernet traffic

Note: here, arp1 is just a name to label the capture traffic. You can write any name of your choice to label your captured traffic.

To see the captured traffic use the following command:

Note:  all the capture command need to be typed in the global configuration mode.

How to captured Cisco ASA traffic in real time

To clear the buffer for all captured traffic, use the following command:

To clear the buffer from all captures, use the following command.