Virtualization helps to integrate several servers into a  physical server in such a way that every server appears  as a standalone server to the users. The three types of  popular server virtualizations are OS virtualization, hardware emulation and paravirtualization. 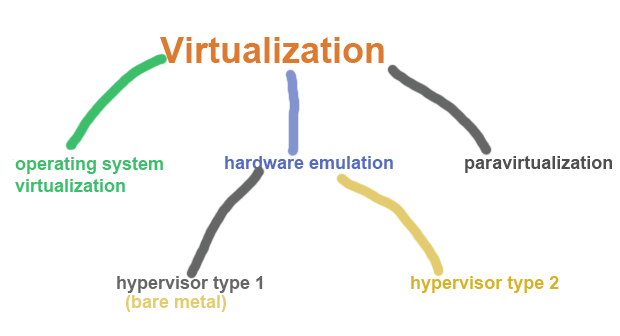 Operating system virtualization helps to create virtualized layer of software on the top of host operating system that resides above the hardware layer. Unlike other virtualization, they create an OS interfaces for applications to run, giving the feeling of a complete OS for the applications. Each virtualized environment has its own file system, system libraries, process tables and network configuration. Since they create a self-contained environment, they are also known as “container”. Therefore, creating the software emulation of an entire OS in a physical server is the essence of OS virtualization.

They support only one operating system as base and guest OS in a single server. You have to choose a single OS  such as either Windows and Linux. All the OS in the container should be same version and should have same patch level of the base OS. If the base OS crash, all the virtual container become unavailable.

They are great for isolating applications, web hosting and training. Popular OS virtualized products are OpenVZ and Virtuozzo.

In hardware emulation, a specialized software, which is also known as hypervisor, creates hardware emulation for OS in a single server. They can host different types of OS in a single server. The OS loaded into each virtual machine works as a standalone and unmodified OS. When a VM (virtual machine) is running, the hypervisor make changes to the part of the OS that make system calls. Hypervisor changes the  OS  by entering a piece of code—which is known as binary translation- to the OS when it is running.  Binary translation takes place in four parts of the OS ( memory, processor, network, storage) that interact with the hardware.

You do not have to modify the OS and applications to run on the virtual environment.

The two classes of hypervisor are: type 1 and type 2. Type 1 hypervisor is also known as bare-metal implementation because they sit directly on the top of hardware, without needing any operating system. Since they can directly communicate with hardware resources, they are much faster than type 2 hypervisor. 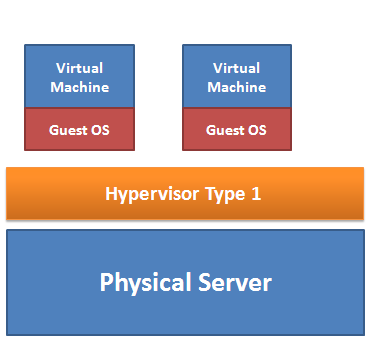 Advantage of type 1: if a single virtual machine crash, it does not affect the rest of the guest operation system. Therefore, they are considered more secure than type 2. Since they generate less overhead, type 1 hypervisor is much faster than its counterpart.

Type 1 Products: include VMware ESX, Microsoft Hyper-V, and the many Xen variants.

Type 2 hypervisor resides on top of the operating system. Since they cannot directly communicate with the hardware, they are less efficient than the type 1. 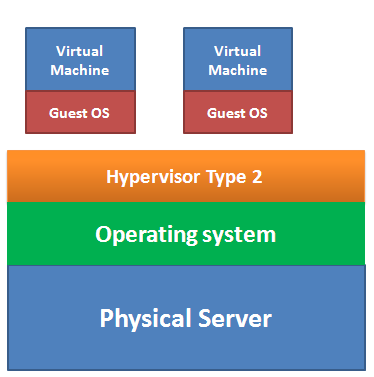 Disadvantage of type 2: they have more points of failure since anything that affect the stability of the base operating system can also affect the guest OS and the virtual machine. When the base OS needs a reboot, all the VM will also be rebooted.

Unlike hardware emulation, paravirtualization does not emulate hardware environment in software, instead it coordinates or multiplexes access to hardware resources in favor of virtual machine.

In paravirtualized environment, a guest OS( called DomainU) is directly installed on the hypervisor(bare-metal architecture) that does not contain any  device drivers for network and  storage. Instead a privileged guest OS-also known as DomainO-has direct access to hardware. All guest OSes access hardware resources via DomainO). When a guest OS(virtual machine) needs to access hardware resources it sends a message to DomianO that access the hardware on behalf of guest OS. When data returns to the hardware, DomainO reads the information and passes it back to the guest operating system that has request it.

DomainO is a standard OS such as Linux that has been modified to communicate with hypervisor to control access to hardware.

The major drawback of paravirtualization is the requirement of modifying guest operating system to execute and communicate with the hypervisor. You must modify the kernel of the guest OS before installation.

Since, it is not possible to modify the kernel of proprietary OS like Windows, paravirtualization software users ( such as Xen users) have to use open source OS like Linux or OpenSolaris.

Having a clear understating on various types of virtualization technology helps IT professional to select the right virtualization solutions for the organization. So, before buying any virtualized products, you can consider testing open source virtual server solution such as Xen (though Xen commercial offerings known as Xen Citrix) that can give cost advantages to your business.