When you write a simple program, for example, to print user name with greetings. For this program to run you assign character string 38 in the following way

Here “name” is the variable name. The above code specifies that you name or users’ input would not be more than 38 characters long because you have already assigned only 38 bit of data into the buffer. So, buffer overflow is such type of attack where the buffer memory is bombarded with more data than it can actually handle. 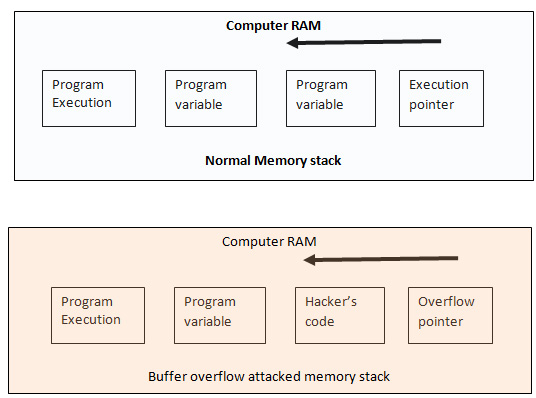 There are two types of buffer overflow attacks:

A stack or heap is used to store users input until a program needs it to run an application. For storing data in static memory stacks are used whereas for storing dynamic data heaps memory is used. In a buffer overflow attack a perpetrator send a large amount of data to exhaust the storing capacity of stack memory. This is done with the help of a malicious program, which can be a pre-written codes or exploits.

What can be done to protect a system against buffer overflow?